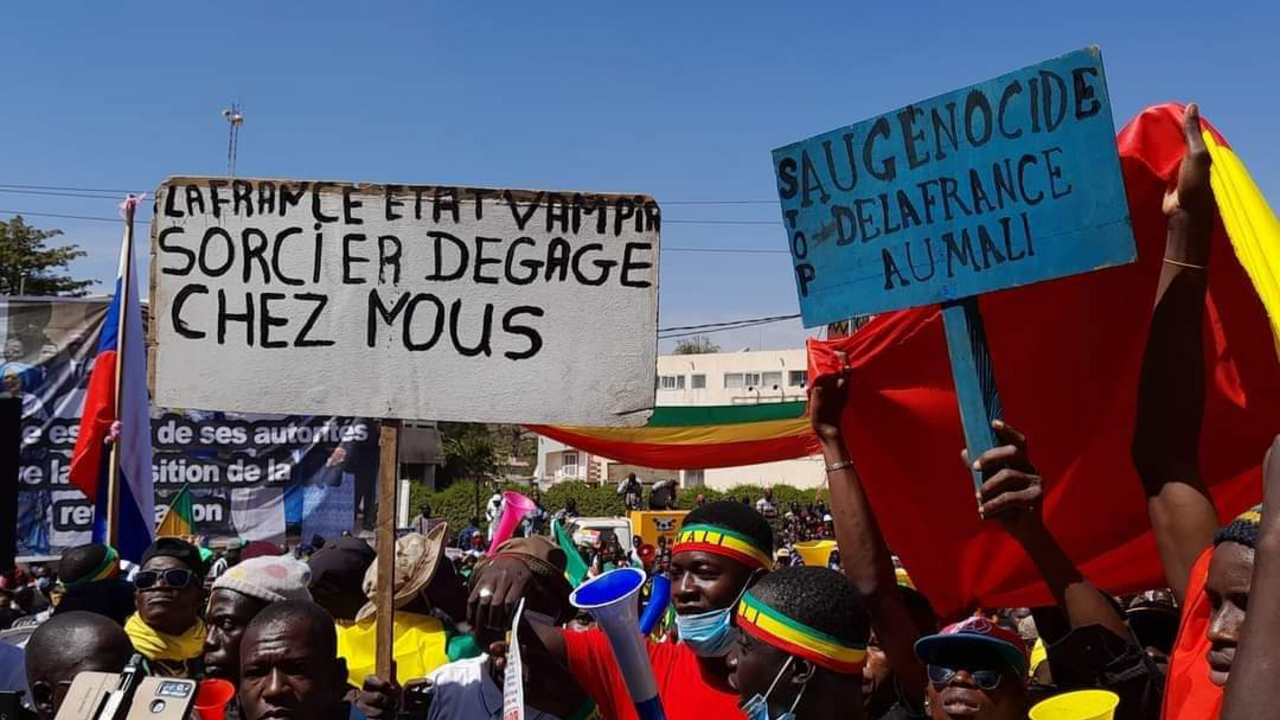 A migration row between Italy and France, the African colonial past, France’s military withdrawal from the Sahel region, and its economic activities in Africa –​​​​​​​ all these entangled topics have resurged with a video.

Italian Prime Minister Giorgia Meloni’s 2019 video has recently reappeared on social media. During a television show, Meloni, then a member of parliament from the Brothers of Italy, accused France of exploiting African countries’ resources, namely Burkina Faso, by using the “colonial currency” that is the Franc CFA. Meloni then said that France’s activities and exploitation are the reason why Europe faces African migration.

She was not the only politician defending the idea. Luigi Di Maio, then deputy prime minister, also blamed France in 2019 for preventing economic development in Africa and causing migration to Europe.

Those declarations provoked diplomatic tensions between Paris and Rome at the time.

In early November, the pair got caught up in a new row about accepting migrants from the humanitarian ship, Ocean Viking. Italy pushed France to allow the arrival at a French port of the ship with 230 rescued migrants aboard after Rome had repeatedly ignored its requests to disembark at an Italian port.

Meanwhile, people took to the streets in Africa, especially Mali, where France had launched military operations to support local forces in their fight against terrorism. French authorities now face severe anti-France sentiments and violent protests against French presence in the area. According to French President Emmanuel Macron, some countries, including Russia, are fueling the growing sentiment.

According to the French Treasury, “the parity of the CFA with the euro is fixed and defined for each currency, the currency remains convertible … and WAEMU countries are no longer required to deposit 50% of their foreign exchange reserve” as they did until a new agreement signed in December 2019. The 15 members of the Economic Community of West African States, or ECOWAS, decided to adopt their own currency, the Eco, by 2027.

Denis Cogneau, professor at the Paris School of Economics and permanent senior research fellow at the French Research Institute for Development, IRD, told Anadolu Agency that trade with former French colonies in West or Central Africa constitutes only 1% to 2% of France’s total trade.

“Those former colonies represent only less than 1% of French investments abroad,” he said. “Companies like Total or Bollore are also very established in the former British or Portuguese colonies.”

Cogneau noted that the parity of the Franc CFA to the euro is very high, which could be interpreted as an advantage in exportations for France.

“For the Eco, everything depends on what this currency will be: Fixed parity with the euro or flexible exchange rate?” the expert remarked, adding that Ghana and Nigeria have not become more industrialized or more developed than the Ivory Coast or Cameroon only due to having their own currency a long time ago.

“It will not be enough to have the Eco become a dragon or a tiger like the countries of East or Southeast Asia,” he said.

It is true that impoverished African countries see their youth leaving in hopes of finding better conditions in Europe. That being said, African citizens from the Sahel or Sub-Saharan regions are not among the primary irregular migrants using the Central Mediterranean route.

However, Frontex data show that 12,347 illegal border crossings were recorded during the same period along the Western Mediterranean route, with 6,003 Algerians, 3,779 Moroccans, 568 Sudanese, 555 Syrians and 393 Malians.

Those numbers are confirmed by UNHCR figures: Malian migrants represent only 0.8% of total sea arrivals since Jan. 1. Cameroon 1.3%, Ivory Coast 4.2%, and Senegal 0.2%.

When France launched military operations in the Sahel region, particularly in the Central African Republic in 2013 and in Mali in 2014, many criticized Paris for seeking deeper economic interests.

West African countries may not be the main trade partners for France but French companies are operating in critical sectors such as energy, communication, and logistics – and mostly not in the former colonies.

The African continent represents 30% of production and 30% of investments for TotalEnergies.

Bollore Logistics decided to leave Africa in 2022 after almost four decades of activities. The Italian-Swiss shipping company MSC will take its place.

Benjamin Auge, an associate researcher at the French Institute of International Relations, IFRI, told Anadolu Agency that apart from Orano, which takes part in uranium extraction in Niger, France has only one other mining company in Africa — Eramet, in Gabon.

Orano, formerly known as Areva, or Cogema, is a company operating in the mining industry, with the French government owning around 80% of it.

“France is not a mining country and has no mining tradition,” said Auge. “Niger’s uranium is absolutely not significant as a percentage of consumption of France’s nuclear power plants, so it is not vital. Mining companies in Africa are mainly Canadian and Australian companies. Chinese oil companies operating in Niger. Chinese and American companies are in Chad and Chinese, Algerian and Italian companies were already in Mali before the security crises in the north a decade ago. French investment in the Sahel region is extremely low. In terms of oil and gas, TotalEnergies is not active in any Sahelian country apart from offshore activities in Mauritania.”

On Feb.1, TotalEnergies and the China National Offshore Oil Corporation (CNOOC) signed a $10 billion deal to exploit oil reserves in Lake Albert in Uganda and build a regional oil pipeline. Environmental groups have reacted negatively to the project.

In this context, the researcher compared France’s situation to the UK: The military and political intervention of France in its former colonies generated anti-French sentiment, unlike the UK which had “cut ties more frankly after their independence.”

This partly explains why France is so heavily criticized in its former colonies where it invests less than in countries like Uganda.

“In Uganda, as in Nigeria or even in Angola, it’s the same thing: Since it does not have a colonial past, France is not pointed out as a scapegoat responsible for the political and economic situation. In these countries, detractors do not target these investments because it is France, but for concerns in terms of the environment and governance,” said Auge.

He argued that “French investments focus more on countries that are not French-speaking.”

“The biggest partner in Africa is Nigeria, where President Macron visited in 2018 — he had even done his internship there in 2002,” said Auge. “The interest of the French public authorities for Africa remains extremely limited and the real interest is focused on the non-French-speaking countries, such as Angola, Rwanda, South Africa, or Nigeria.”

The expert drew attention to France’s will to keep its areas of influence in Africa and that “it’s not at all linked to specific economic investments.”

For Auge, France is not ready to leave its former colonies.

“And this is only because in case of the fall of regimes and chronic instability, the direct consequences on Europe, particularly in terms of migration, are felt,” he said.​​​​​​​​​​​​​​