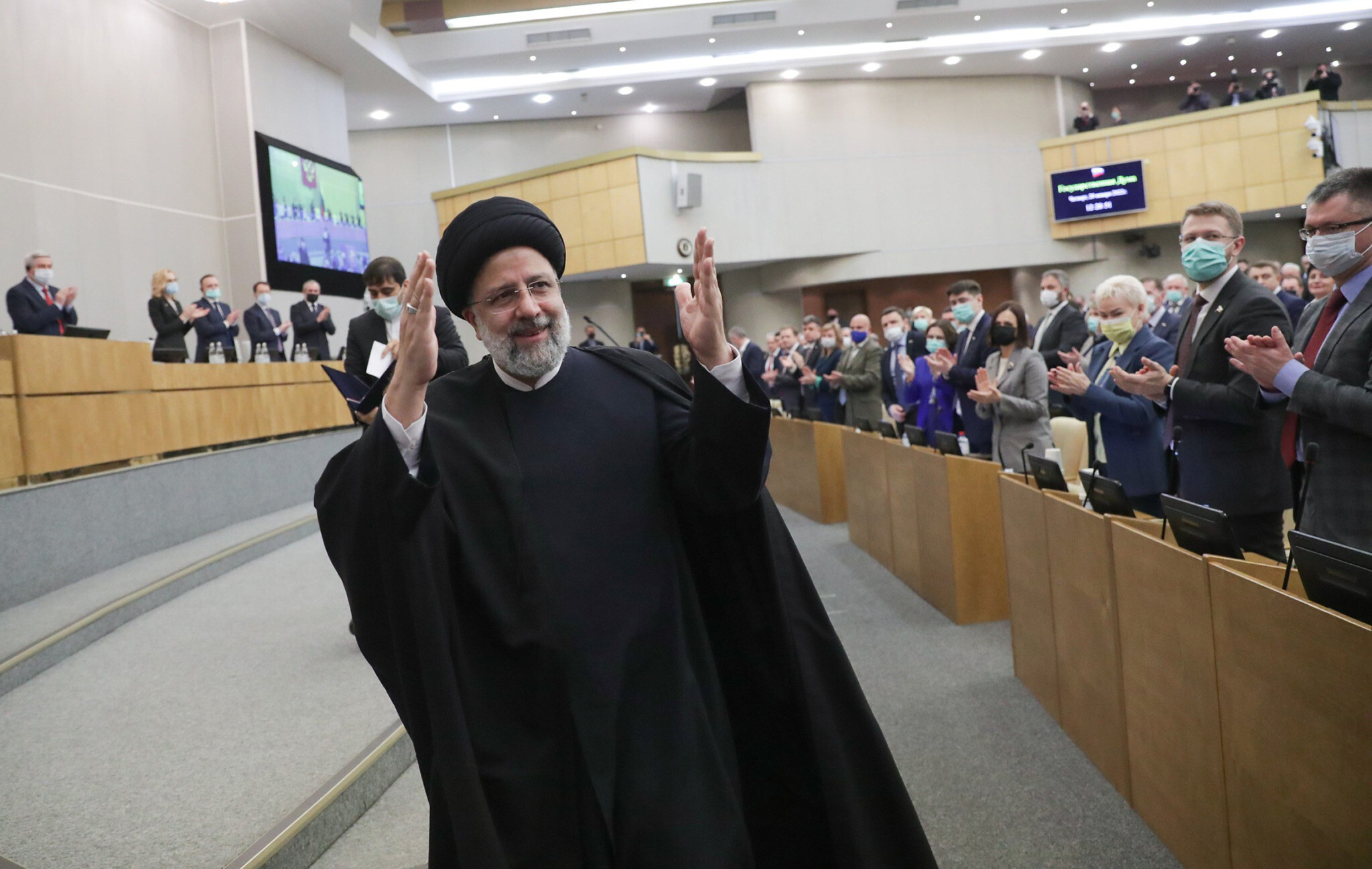 With a history of anti-apartheid support, the Islamic Republic enjoys warm ties with Pretoria – which it seeks to exploit, as Western sanctions sting

He lauded Iran’s support for South Africans fighting against the former apartheid government — including its support for the African National Congress (ANC), the political party that saw his grandfather Nelson Mandela elected South Africa’s first president in 1994 and has governed the country since then.

“It is wonderful to be in the Islamic Republic of Iran, a country and nation that inspired my grandfather whilst he was in prison,” he said. “The Islamic Revolution of 1979 under the leadership of Imam [sic] Khomeini represents one of the greatest defeats of modern imperialism.”

Mandla Mandela is also a vocal anti-Zionist and is associated with Africa4Palestine, a South African group that evolved out of the local Boycott, Divestment and Sanctions (BDS) movement.

A few months prior to Mandela’s reception of the Iranian award, motorists in Menlyn, a suburb of South Africa’s capital city Pretoria, spotted an odd billboard. It displayed Nelson Mandela, the late ayatollah Ruhollah Khomeini of Iran, and the gilded Dome of the Rock in Jerusalem.

The billboard’s text quoted Mandela: “Our freedom is incomplete without the freedom of the Palestinians.” Next to Khomeini, it said, “International Al Quds Day is a universal day for the oppressed to rise and stand up against the arrogant.” It bore the logo of Africa4Palestine.

Experts say these links between Iran and the anti-Israel lobby in South Africa are part of the Islamic Republic’s drive to create “strategic depth” in Africa as it tries to grow its influence beyond the Middle East. And it is no coincidence that they come just as Israel has been restoring frayed ties with the continent.

Prof. Hussein Solomon, a lecturer on politics and international relations at the University of the Free State in Bloemfontein, South Africa, says that what Nelson Mandela stood for and what the Iranian regime stands for are in “complete opposition” to each other.

“I don’t understand South Africa’s proximity to Iran from a values perspective,” Solomon said. “The Islamic Republic is a theocratic state which is highly repressive towards its own citizens. South Africa, though a highly flawed democracy, remains a democracy.”

Imam Sayed Ali Khamenei on a billboard in the streets of South Africa in commemoration of the day of Al Quds.

Solomon also noted that Iran’s proxy, the Lebanese terror group Hezbollah, operates in many African countries, including South Africa, posing a threat to these states’ national security interests. However, much to the dismay of the local South African Jewish community, the ANC has expanded its contacts with the Palestinian terror organization Hamas — another of Iran’s proxies — hosting visiting senior Hamas figures in recent years.

In a May 2022 visit to Pretoria, Iran’s Foreign Minister Hossein Amir Abdollahian said that Iran “does not place any restrictions on relations with South Africa, and in particular, [Iran’s] new government is after developing relations with African states.”

Solomon also noted that Iran’s proxy, the Lebanese terror group Hezbollah, operates in many African countries, including South Africa, posing a threat to these states’ national security interests. However, much to the dismay of the local South African Jewish community, the ANC has expanded its contacts with the Palestinian terror organization Hamas — another of Iran’s proxies — hosting visiting senior Hamas figures in recent years.

In a May 2022 visit to Pretoria, Iran’s Foreign Minister Hossein Amir Abdollahian said that Iran “does not place any restrictions on relations with South Africa, and in particular, [Iran’s] new government is after developing relations with African states.”

“Iran supported the freedom organizations [such as the ANC] and this relationship remains as healthy as ever,” said Jasmine Opperman, a South African security consultant specializing in extremism and political violence. She echoed Mandla Mandela’s sentiment that South Africa’s relationship with Iran goes way back.

In return for supporting ANC and others, Iran relies on South Africa’s protection in the United Nations, African Union and International Atomic Energy Agency, Solomon said. South Africa has consistently promoted Iran’s right to the peaceful application of nuclear energy in these forums, calling sanctions against Iran illegal and irrational.

“During the apartheid era we had significant exchanges of oil for uranium during the shah [of Iran]’s rule,” she said. “But then of course when the revolution in 1979 happened, the shah was removed and the ayatollahs came in, that changed relations significantly.”

Africa and the ayatollahs

“The ideological battle between the West and Iran is transferred back into Africa and it seems like no African state will escape this reality,” said Opperman.

Tehran also clearly identifies with the developing world and its objectives and grievances. It taps into anti-Western sentiment and uses growing trade ties with Africa to blunt the effect of Western sanctions.

“Iran remains a strong ideological partner of the continent,” said van Wyk, adding that Iran positions itself as an alternative to a decadent and rapacious West, and its strident rhetoric resonates with many African leaders. “Iran has a lot of ‘street cred’ on the continent,” she said.

“History plays no small part in this ideological partnership,” said Dr. Wesley Seale, a member of the African National Congress who holds a doctorate in international relations. “With the Islamic revolution in 1979 and the support of the USSR, Iran and then later Russia enjoyed historic links with Africans fighting for freedom.

“In one of its first international moves, post the Revolution, Iran joined the Non-Aligned Movement [a Cold-War era bloc of developing countries seeking not to ally with one or other side, that still exists today]… and started to promote south-south cooperation,” Seale said.

But Seale doesn’t believe that Iran’s interest in Africa is particularly unique, especially as it tries to mitigate the effects of Western sanctions. On the flip side, he said, Africa is understandably interested in Iran’s oil.

“As Africa pushes for reform of the international order, especially the UN, it will count on countries that have long argued for a more democratic and balanced world order. Countries such as Iran and Cuba, often seen as persecuted by the West, become ideological partners in this quest for an international order where equality of nations and respect for sovereignty becomes intrinsic,” he said.

There is a discernible ramp-up in Iran’s engagement with Africa under the Islamic Republic’s President Ebrahim Raisi, who took office in August 2021.

“Raisi has expressed his readiness to expand economic and trade cooperation as well as to provide greater technology transfer and technical knowledge,” said Dr. Glen Segell, a research fellow at the Ezri Center for Iran & Gulf States Research at the University of Haifa.

Raisi has sought to recalibrate the relationship with Africa, said Opperman, citing the visit of Mozambican President Filipe Nyusi to Iran in February 2022.

“Even secondary priority states for Iran are now part of their strategy,” Opperman said. “Clearly this is aimed at extending their influence, countering their position of isolation, and countering Israeli and Western influence in Africa.”

Israel, too, has expanded its relations with Africa, symbolized by the opening of a new Israeli embassy in the Rwandan capital of Kigali in 2019. Israel provides agricultural and technological know-how in many African states, especially in the continent’s east and west.

Segell notes how Raisi is making common cause with post-colonial Africa “after his predecessor Hassan Rouhani spent eight years neglecting it, pursuing rapprochement with the West — the United States and Western Europe, and later the East — China and Russia.”

Will practice match the new rhetoric? Having been named as part of the “Axis of Evil” along with Iraq and North Korea by former US president George W. Bush some 20 years ago, Iran is being restyled by Raisi as part of the “Axis of Resistance” against Western imperialism and sanctions. Raisi envisions Iran as continuing to support pro-Palestinian organizations in Africa and circumventing sanctions — if it can’t lift them.

“In seeking greater influence on the African continent, Iran will challenge those who will defend their vested interests,” Segell said. “If they feel threatened, Africa is likely to become a religious proxy Shia-Sunni battleground and an economic contest between Iran, Turkey, Russia and China, who are also new actors in Africa for similar reasons to Iran. Those losing will be the Africans.”

Source : The Times Of Israel