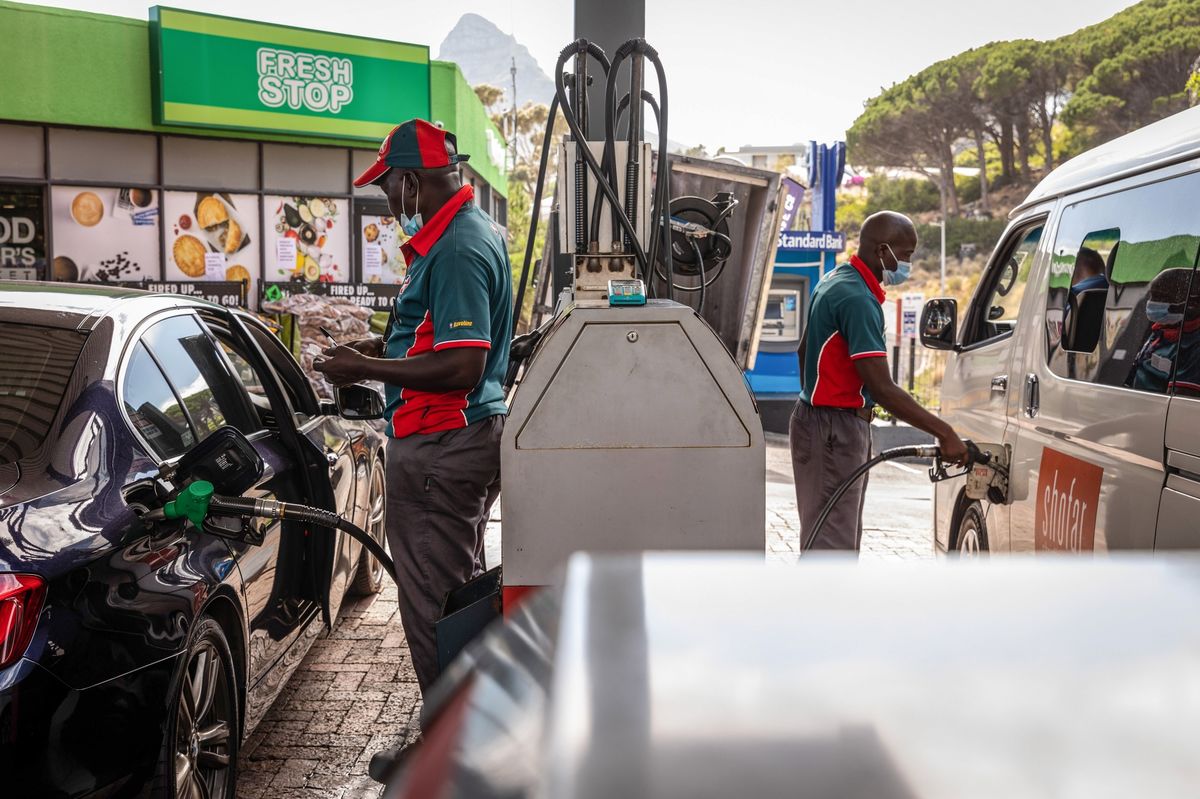 In a predictable finding, prices of goods and services in Nigeria have surged, topping the high in 17 years, as inflation rose to  22.5% in August.

This fact was contained in the Consumer Price Index ( CPI) report released by the  National Bureau of Statistics last week in Abuja.

Specifically, CPI  measures the changes in the prices of 740 goods and services consumed in a basket and weighed to get the average for statistical evaluation. The weight of each item is based on household expenditures of rural and urban populations on it across the states in Nigeria. In the latest report, essential items like Food and Beverages weighed the

highest at 52% in the basket.  Housing, Water, Electricity, and Gas weighed a combined  16%; Clothing and Footwear 8% per cent and Communications and Recreation 0.7% and 0.1% respectively.   This result is a replica of a current trend in Africa where the rise in prices of essential commodities has pushed a harsher economic condition for the people thereby pushing the African economy into imperilment.

The worrisome is the increase in prices of food items like bread, cereals, potatoes, yam, protein etc even in rural areas where stable crops are produced.

In Nigeria, experts have associated the increase in prices of items with the disruption in farming, increase in import costs due to the naira depreciation and the effect of the war in Russia and Ukraine.

More considerably is the insecurity in the farms due to the herders-farmers clashes that are prevalent all over the place.

On a much larger scale, inflation has spread across Africa arising from the negative impact of global disruption in trade due to the Russia-Ukraine war that started Feb 2022.

The surge in inflation has led reputable financial institutions and brokers to predict a negative outlook for currencies in the continent in the last week.

According to the Daily Trust report, AZA, the largest non-bank currency broker trading at over $1 billion annually, said countries like Ghana, Malawi and Rwanda are going through rising inflation that is unprecedented in the last decades.

Many African countries are facing similar inflationary pressures, especially Ghana at 33.9%, Rwanda at 20.4%, Uganda at 9% and South Africa at 7.8%. This shows that exogenous factors continue to impact African economies.

Also, analysts have predicted that, with the elevated rate of inflation, there is a probability that the interest rate in Nigeria will be further increased at the next MPC meeting which is coming up at the end of  September.

Ghana extremely battling 21-year high inflation that has risen to 33.9% in August from 31.7% in July, as import prices continue to soar.

The Cedi is currently adjudged as the world’s second-worst performing currency in 2022 after the rupee of Sri Lanka as it lost over a third of its value against the dollar in recent times.

Food inflation in the country rose by  30.1% from a year earlier, compared with a 26.6% increase in April. Non-food inflation accelerated to 25.7%, from 21.3% in the previous month, with transport costs increasing to 39%.

The introduction of a 1.5% tax on electronic payments, which was ratified by parliament in  March to help the reduce government budget deficit added to the inflationary tensions.

In Malawi, the inflation rate for consumer prices has moved between  7.4% and 83.3% in the last 39years.

Inflation has more than doubled since the beginning of the year, to its current level of 24.6%. The  FX shortage in the economy has deepened its fuel need. The crisis has forced the Malawian central bank to devalue the Kwacha by as much as 25% in May. Currently, the country is seeking IMF support to help with the fuel crisis, but the Fund reportedly postponed its planned visit this week to discuss a new loan.

According to AZA “with the IMF delaying intervention, we see room for further forex depreciation as imports continue to put pressure on already declining reserves,”

In Rwanda, prices have been rising at the fastest pace in more than a decade, hitting 15.9% in August. National Bank of Rwanda’s Governor, John Rwangombwa expects annual inflation to peak at 16% this year, given the combined measures of rate hikes and a continued government subsidy on fuel and agricultural inputs. The Governor further noted, adding that the Rwandan Franc could still see further depreciation due to the country’s continued exposure to global commodity prices. Rwanda’s major exports include coffee, tea, precious metals, and lead.

In Kenya, food inflation for August was steady at 15.3%, where it was a year earlier.

According to Prof XN Iraki, an Associate Professor of Business Management at the University of Nairobi, prices of a 2kg packet of maize and wheat flour hit 200 shillings (US$2) from a low of 120 shillings in about three months. That was a 67% increase. The one-year inflation rate reached 7.91% in June 2022.

He said “Kenya’s average annual per capita income is US$5,270. With inflation, citizens lose even this limited purchasing power. The same money buys less. Wages and salaries do not go up fast enough” in an article he published in LSE magazine.

The two key drivers of inflation in Kenya’s consumer price index are food and energy.

Russia’s war on Ukraine has raised the price of oil to the highest level in history, which spills over to the rest of the global economy. And about 30% to 50% of Kenya’s imported wheat comes from Russia and Ukraine. Ukraine is exporting 60% less wheat this year compared with 2021, leading to a rise in the price of wheat and its derivatives like bread. Also, unreliable rains have cut the domestic production of maize and other food crops in Kenya. Production is about 15% to 20% below the five-year average.

Like other African countries,  the major driver identified by Prof Iraki of inflation is a weak currency.  Kenya’s currency has declined by 3.5% since the start of the year, partly because of decisions taken in other countries that affect the value of their currencies.

In South Africa, the inflation surge is milder as it increased to 6.5% in May 2022 compared to 5.9% recorded in the previous month even though the rate surged past the central bank’s target range for the first time in more than 5 years. This is also the highest reading since January 2017 when the rate was 6.6%.19 Jul 2022.

Generally, experts have attributed the economic crises in Africa to the Russia-Ukraine war and other global issues which no one knows when they would be resolved.

While food  Inflation affects households, the increasing trend of food inflation will affect the region as a large percentage are poor. The burgeoning prices of basic food items will reduce people’s access to basic food items.

Where is the remedy?

In Nigeria, the Central Bank of Nigeria(CBN) has intervened through its monetary policy to intermittently increase interest rates at the Monetary Policy Committee( MPC) meetings.

The bank recently announced an increase in interest rate from 11,5% to 13%. Each time the Central Bank changes its monetary policy in this way, the banks raise the borrowing rate and stifle production.

The policy assumed that an increased interest rate will reduced consumption.

However, this approach still poses some problems. This is because inflation in Nigeria is cost-push inflation. Therefore to assume that monetary policy will work in Nigeria the way it works in other countries is misleading.

The main cause is supply hiccups; insecurity in the country’s food-producing areas, poor infrastructure and the war in Ukraine which is driving up the price of commodities such as wheat. The value of the Naira is depreciating thereby putting pressure on the cost of goods and services.

Also, it is plausible to note that the Nigerian economy is based on a large informal sector, a source of income for nearly 80% of the population. The majority has weak links to the formal sector. Unlike households in developed countries,  Nigerians may not change their consumption pattern because of rising interest rates.

Individuals and households are not big borrowers either. The conditions imposed by the banks to obtain loans make it almost impossible for many Nigerians to secure credit.

The inability of many Nigerians to get loans from banks means they won’t have to worry about paying higher rates on mortgages, credit cards etc. Also, the rate will have no impact on the prices of goods and services typically consumed by low-income Nigerians. The rise in prices of these basic foodstuffs is due to cost push-related factors.

In classical economics, it is said that a rise in the interest rate increases borrowing costs and thus, reduces investment, production and employment.

Nigeria, however, does not fit this definition. Much of its economic growth is driven, not by the production, but by the export of oil which is the monolithic product that contributes 80% of the revenue of the government. Therefore the impact on output and employment will not be great.

All things being equal, Nigeria would have benefited from the MPC policy of increased interest rates. Unfortunately, there are issuesy like insecurity, poor infrastructure, and policy summersault which make it unattractive for portfolio investors to jump at high-interest rates.

To be fair to the apex bank in Nigeria, it has recently introduced other monetary and fiscal policies to expand production and tame runaway inflation. A good example is the heavy borrowing of farmers under its anchor borrowing policy to stimulate production and employment in the real sector, it uses “intervention funds” to support strategic sectors of the economy. Some N385 billion (about $1.2billion at the official exchange rate of 415 nairas to $1) was earmarked for intervention projects in March 2022.

It is hoped that this gesture will in the long run stimulate employment if could mobilise funds for job creation as well as investments in infrastructure and specific areas like agriculture, labour-intensive manufacturing and agribusiness.

The story is the same in Kenya. Politicians are focused on knee-jack approaches like providing subsidies to agricultural products, imposition of taxes, and increase in interest rates. However, the fact remains that the country must enhance production in the long run.

According to Prof Iraki, In the long run, “Kenya must produce more of whatever is in shortage. For example, Kenya produces only 39% of its national wheat consumption. Land for agriculture is being put into alternative use or is subdivided.

Productivity is key in reducing overall inflation in all African countries. High productivity depends on among other things, innovation and efficiency. Increasing productivity takes time. You have to redesign factories, irrigate new land, and try new crops and animal breeds.

The fact remains that in many African countries there can be no quick fixes in combating the effect of inflation that has currently streamed across Africa.

* Ajibola is an Economist, Author and CEO of  MediaEdge Communications Ltd, Abuja.