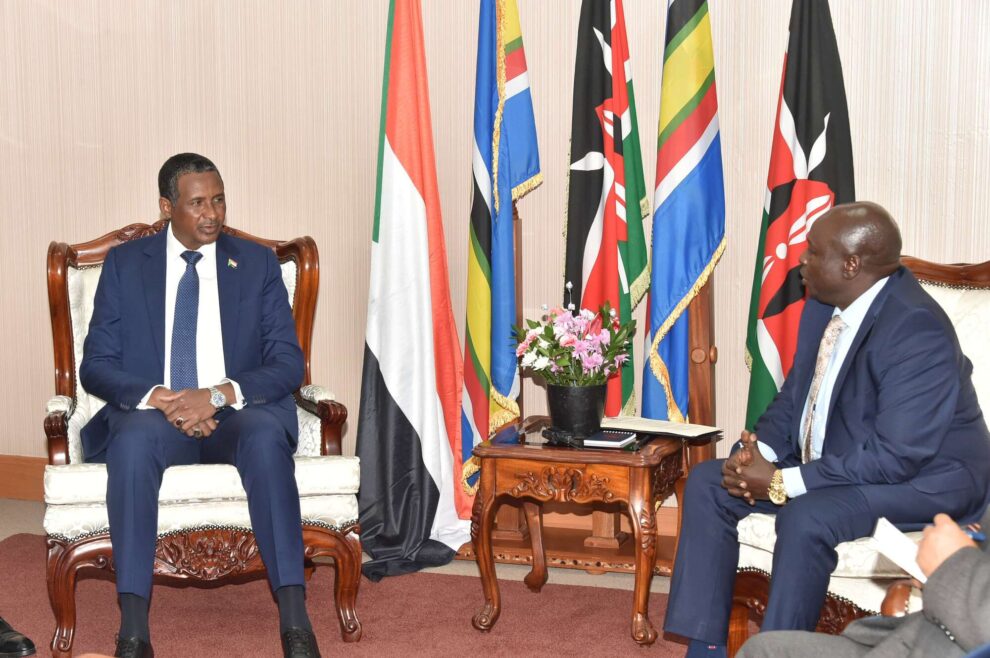 Kenya’s President William Ruto is attempting a new rescue project for Sudan, seeing it a critical link to solving other problems in the Horn of Africa.

This week, Mohamed Hamdan Dagalo, the deputy leader of the country’s Sovereign Council popularly known as Hemedti, visited Nairobi in what was largely seen as Khartoum regime’s continued search for legitimacy.

But his trip was on the invitation of Nairobi to broker a gradual re-acceptance into the regional and continental fold — the African Union.

Sudan hasn’t been peaceful since the military under Gen Abdel Fattah al-Burhan toppled the transitional government of Abdalla Hamdok in November 2021. It has been suspended from the African Union even though it is also a peace mediator in neighbouring South Sudan.

A joint bid by the AU, the UN and Inter-governmental Authority on Development (Igad) led to a dialogue deal being signed in December.

Today, however, there remains uncertainty on who will form the transitional government.

Sudan, before the political turmoil prior to the removal of president Omar al-Bashir, was a good market for its neighbours, including Kenya. Now, Nairobi wants a stable Khartoum to secure business.

“We appreciate the cooperation between our countries. Sudan imports a lot of tea from Kenya and we would like you to import more because our tea is the best in the world,” said Gachagua.

“The most important matter in this visit is economic cooperation. There are big economic dimensions in this visit, the first is trade between Sudan and Kenya, which is considered the gateway to East and Central Africa. Sudan does not have a large commercial presence in these areas, but now through Kenya, Khartoum can access them, especially if the shipping line between Port Sudan is expanded. This provides a big service, especially with the development of Kenya’s infrastructure connectivity,” Gumaa said.

It was a mixture of the efforts of the Sudan Transitional Sovereignty Council to gain legitimacy in the region, as well as private arrangements for its own gold as it seeks to save its crumpling economy.

According to the Sudanese News Agency, Hemedti gave a report to the Kenyan leaders on the political developments in Sudan, including Khartoum’s readiness to allow civilian transition with planned elections, and rejoin the international economy.

President Ruto had announced that Kenya would host a special Summit of Igad before the end of January with a focus on the peace process in South Sudan. With Sudan itself in turmoil, however, it needs help too.

Kenya is taking the lead in seeking the lifting of the AU suspension of Sudan, a diplomat familiar with the Ruto administration’s regional diplomatic plan told The EastAfrican.

“Sudan is a big market for Kenya, especially for tea and coffee, and it is positioning for Kenyan banks too,” he said.

Ruto is banking on a decision by the 48th Ordinary Council (Ministers of Foreign Affairs) of Igad which agreed on the reinstatement of the membership of Sudan to the AU.

The ministers in November resolved to engage the AU to dispatch a fact-finding mission to Sudan to assess the conditions for the resumption of full membership. Kenya was tasked with lobbying, sources indicated.

“Igad’s regional integration agenda can best be advanced through a stable region and the executive secretary has always impressed upon top the policy organs of the organisation to invest in preventive diplomacy, mediation and good neighbourliness.

Kenya stands to benefit most given its advanced economic infrastructure in banking, technology, industries and transport,” the official said.

The Summit dates were yet to be announced by press time, even though Igad officials did indicate the bloc would follow through the search for a solution for Sudan.

He suggested that Sudan’s instability could make it harder for neighbours to tame illicit trade, illegal arms flow and security threats, including terrorism.