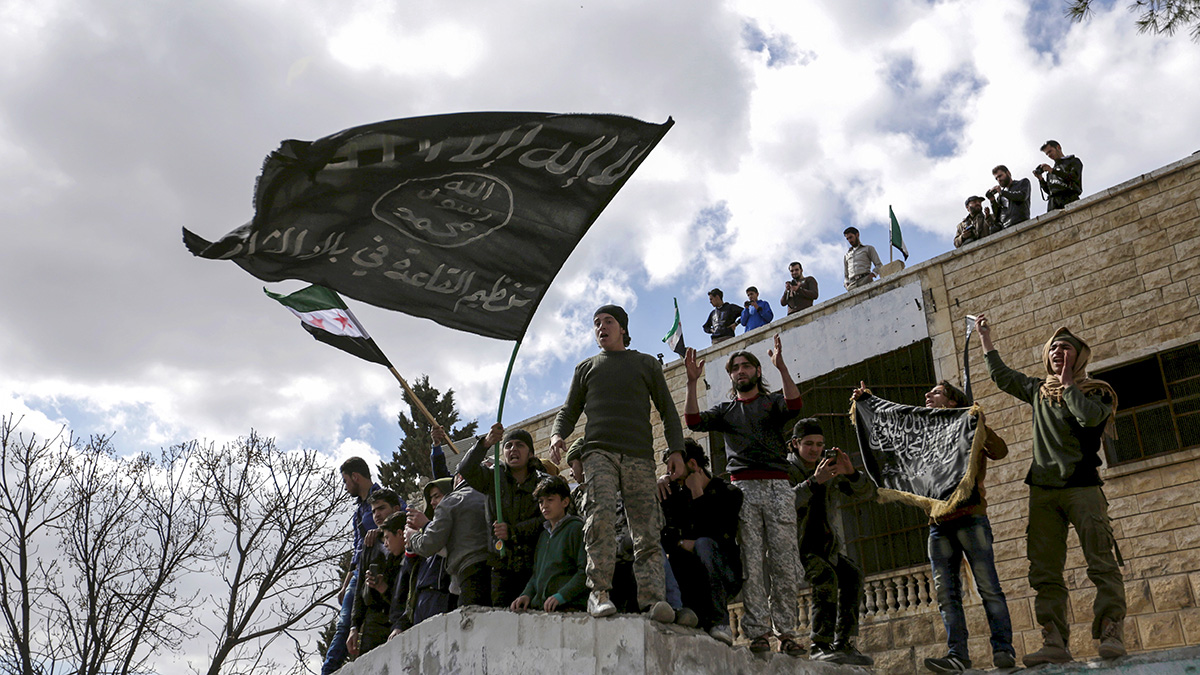 Terrorist organizations are rarely random and are instead shrewd and calculating when it comes to target selection, message, and intended audience.

ISIS and al-Qaeda have remained the most active terrorist groups in the world, despite multiple U.S. efforts to target and eliminate both organizations. ISIS leader Abu Bakr al-Baghdadi, for example, died when he detonated a suicide vest during a raid by U.S. Special Operations forces in northwestern Syria in October 2019. Abdullah Qardash, an Iraqi national also known as Abu Ibrahim al-Hashimi al-Quraishi, and the successor to al-Baghdadi, was killed in a U.S. raid in Idlib province in northwestern Syria in February 2022. Ayman al Zawahiri, who became the leader of al-Qaeda after the assassination of the group’s founder, Osama bin Laden, in May 2011, was killed by a U.S. drone attack in Afghanistan in July 2022.

ISIS-Core is still active in Iraq and Syria, where sleeper cells perpetrate around 500 low-profile and low-scale attacks each year. Given the relatively mild nature of the attacks, ISIS-Core is seen as an organization that has lost its capacity. ISIS-affiliated groups also are active in the Philippines, Afghanistan, and Pakistan and even more so in Africa. Groups affiliated with al-Qaeda are active primarily in the Middle East and Afghanistan but have made significant forays into Africa.

Both groups, however, are intent on spreading their influence and jihadist beliefs and have made Africa the new epicenter for jihadist violence. The Africa Center for Strategic Studies, for example, reported that jihadist groups – primarily ISIS and al-Qaeda – were responsible for 5,110 violent events in Africa in 2021. Most of these events occurred in five theaters: Somalia, the western Sahel region, the Lake Chad basin, northern Mozambique, and the Sinai Peninsula.

The presence of ISIS and al-Qaeda in Africa, according to the U.S. State Department’s 2020 Annex of Statistical Information, is heavily weighted toward ISIS, which is represented by eight affiliates: ISIS-Somalia, ISIS-Libya, ISIS-Sinai (with operations in Egypt’s Sinai Peninsula), ISIS-Central Africa Province (with operations in the Central African Republic), ISIS-Greater Sahara (with operations in Mali, Burkina Faso, and Niger), ISIS-Mozambique (with operations in Mozambique and Tanzania), ISIS-Democratic Republic of Congo, or ISIS-DRC (with operations in Congo and Uganda), and ISIS-West Africa (with operations in Nigeria, Niger, and Cameroon). In contrast, al-Qaeda has three affiliates in Africa: Jama’at Nasr al-Islam wal Muslimin (JNIM), Al-Shabaab, and Ansaru. In terms of incidents and fatalities in 2020, Al Shabaab was the most active al-Qaeda affiliate while ISIS-DRC was the most active ISIS affiliate (see Figure 1). The numbers reported here likely underestimate the actual increase in violence linked to the two affiliated groups, as the Annex of Statistical Information lists the perpetrator as “unknown” if the group responsible for an incident or fatality is not named or identified in a credible source. For example, the number of attacks by unknown perpetrators in 2020 was around 82 percent (400 incidents) in the Sahel region, where JNIM and ISIS-Greater Sahara have been the most active groups. 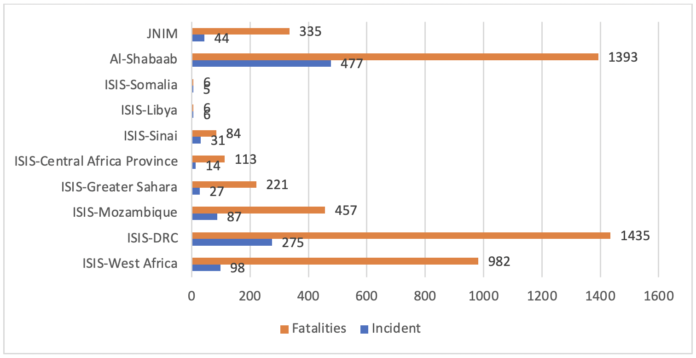 Motivations for affiliating with the original ISIS group (often referred to as ISIS-Core) have varied. ISIS-Libya, for example, pledged allegiance to ISIS based on genuine ideological alignment. ISIS-Sinai turned to ISIS for mentorship after losing its senior leadership, while ISIS-Somalia sought to take advantage of the core group’s image. ISIS affiliates in West Africa and the Central African Republic pledged allegiance to ISIS-Core because they anticipated either individual or group benefits, such as global popularity, from aligning with the larger organization. In the western Sahel region, a group of al-Qaeda leaders broke from that organization and pledged allegiance to ISIS because they believed it was a more democratizing force than al-Qaeda. The breakaway group then referred to itself as ISIS-Greater Sahara.

ISIS-Core has real and tangible links with these affiliates, each of which has significant autonomy and are in no way controlled by the core organization. ISIS-Core serves as the main point of dissemination for its affiliates’ media products. The core group offers personnel transfers, approves the replacement of leaders, provides training, shares its tactics and procedures, transfers money and weapons to its affiliates, and orchestrates attacks in areas where its affiliates operate. Despite their autonomy, the affiliates sometimes interact with each other to learn various terrorist tactics. The affiliates engage in extremely violent activities that include beheadings, suicide bombings, prison breaks, and the forceful takeover of cities they want to dominate or govern. Often the goal is to seize and control territory and provide governance for the locals.

Al-Qaeda, meanwhile, also has increased its influence in the African region. Based in Somalia, Al Shabaab has been one of the most active al-Qaeda groups in the world. Its influence extends into neighboring Kenya. JNIM, which arose from the merger of four jihadist groups that operated in the Sahel region of northern Africa, is another active al-Qaeda affiliate in Africa. The group is based in Mali but has continued to wage attacks in Burkina Faso and Niger. In 2021, for example, JNIM carried out terrorist attacks in Togo and Benin, where the group has engaged in clashes with the two countries’ military.

Al-Qaeda’s near-enemy strategy (i.e., the targeting of local regimes) and far-enemy strategy (i.e., the targeting of countries in the Western world), which it adopted after the 9/11 attacks on the United States, prioritize fighting against local governments that oppose jihadist ideologies. According to the 2020 Annex of Statistical Information, the number of fatalities in Muslim countries was around 24,000 out of a total of 29,000 fatalities where jihadist groups had targeted state officials and civilians. Jihadist groups in Africa have been successful in carrying out attacks, controlling territory, and defeating military opponents. In most African countries, jihadist groups are better equipped and use more technologically advanced weapons than their military foes. U.N. peacekeeping missions have been only marginally effective in stemming the violence, largely because the peacekeepers lack the capacity to address the root causes of armed confrontations in the region. Endemic corruption in the African region compounds the problem. The result is a vicious cycle much like what occurred in Iraq and Afghanistan where millions of Western dollars flowed into the pockets of corrupt African politicians and government officials. Such corruption, unfortunately, is an inseparable element of the governmental system in most African countries. Porous borders on the continent also facilitate the transfer of money and weapons from illicit suppliers to terrorist organizations. ISIS-West Africa militants, for example, easily cross the border between Nigeria and Niger and Nigeria and Cameroon to carry out attacks. Similarly, Al Shabaab takes advantage of the porous border between Somalia and Kenya to access the logistics needed for attacks in these two countries.

Ongoing Clashes and the Pursuit of Popularity

In addition to jihadist groups, Africa has seen violent clashes between groups over religious and ethnic differences. These same groups, however, have watched closely the increasing popularity of ISIS and al-Qaeda affiliates on the continent and understand that fighting under the banner of either group would lead to greater popularity and increased access to the resources needed to crush the enemy. ISIS-Mozambique, for example, evolved from the local religious/ethnic group Ansar al Sunna into the violent terrorist organization it is today. The transition occurred in 2017 when Ansar al Sunna declared its loyalty to ISIS and changed its name to ISIS-Mozambique. Several years later, the U.S. State Department added ISIS-Mozambique to its official list of Foreign Terrorist Organizations (FTOs). Another local religious/ethnic group, the Allied Defense Forces in Congo, declared its loyalty to ISIS and subsequently was added to the State Department’s official list of FTOs in 2021.

Terrorist organizations are rarely random and senseless in their attacks. They are instead shrewd and calculating when it comes to target selection, message, and intended audience. Al-Qaeda and ISIS affiliates in Africa, for example, follow a hearts-and-minds policy that involves taking control of an area, operating like a de facto state, and providing logistics for the locals. The intended message to local Muslims is that the terrorist group will ensure their security in the community. For example, al-Qaeda-affiliated JNIM and ISIS-Greater Sahara in the Sahel region and ISIS-West Africa in Nigeria strategically target state institutions and Christian groups and abstain from targeting local Muslims. The local Muslims, in turn, perceive the affiliated groups as being more powerful than the state officials in the territories the groups control. Efforts to win the hearts and minds of the local Muslims generates sympathy for the groups and creates opportunities for the acquisition of operating funds and the recruitment of new members.

Almost all Islamist terrorist organizations are under the influence of a twisted version of Salafism that involves a strict (and controversial) interpretation of the Qur’an as espoused by Salafi scholars. Wherever this ideology spreads – be it Asia, Africa, or the Middle East – violent Islamist organizations can find a favorable environment in which to flourish and to threaten regional and global security. For example, the prevalence of Salafist ideology in Bangladesh, Afghanistan, Pakistan, Indonesia, and the Philippines simply makes a bad situation even worse by increasing the number of terrorist groups in Asia. The situation in Africa is quite similar. Salafism in Somalia, for example, played a key role in the emergence of al-Qaeda-affiliated Al Shabaab in that country. Gulf states that have sponsored efforts to spread the Salafist ideology have opened mosques in Africa and assigned clerics to even the smaller villages in rural Africa where they teach a violent version of Salafism. Moreover, most African students who have chosen to pursue their education in one of the Gulf states return home as adherents of a twisted version of Salafism.

To conclude, both ISIS and al-Qaeda have intensified their expansion efforts in Africa, though ISIS-affiliated groups continue to outnumber al-Qaeda groups on the continent. Local governments lack the necessary resources to defeat these organizations. On the other hand, U.S. counterterrorism strategies in the region target ISIS- and al-Qaeda-affiliated group leaders by conducting military operations, offering training programs for law enforcement and military personnel, and deploying drones to target jihadists. These strategies are efficient and help to mitigate the risks posed by ISIS- and Al Qaeda-affiliated groups. However, policies that are more strategic in addressing the root causes of jihadist terrorism in Africa are needed to defeat these organizations and prevent them from arising anew.