The Case for Cautious Optimism in Ukraine 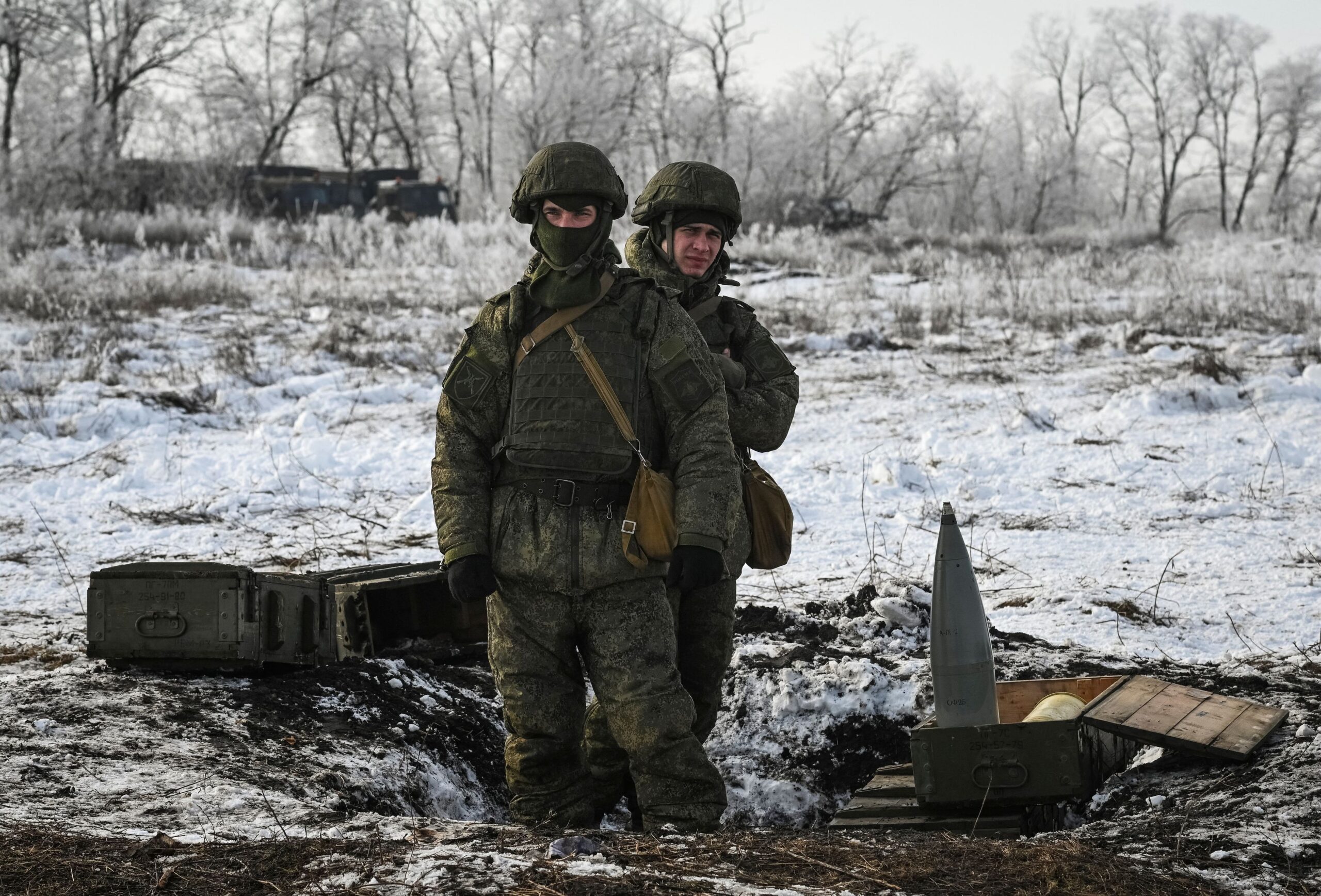 Ahalf year into the Russo-Ukrainian war, two dueling interpretations of what’s happening on the ground increasingly shape Western views of the conflict. The first narrative—and seemingly the more-dominant one—is that the Russians are slowly but surely grinding away at Ukrainian defensive lines in Donetsk and Luhansk, pummeling the defenders with their vast stores of artillery, and slowly but systematically gaining ground. This view also claims that Ukraine now finds itself close to exhaustion, having suffered significant casualties and equipment losses. The only prudent action, therefore, would be to pursue some sort of negotiated settlement—in essence, trading land for a temporary peace—before a bad situation gets even worse.

A second, more-optimistic view turns this take on its head and sees a Ukrainian victory unfolding over the coming months. This interpretation notes that Russian advances have stalled all along the 1,000-kilometer (620-mile) front; that Ukraine has used Western-supplied long-range precision artillery, such as the U.S. High-Mobility Artillery Rocket System, or HIMARS, to neutralize Russia’s principal military advantage by striking Russian artillery ammunition depots far behind the front line; and that Ukrainian forces seem to be gearing up for a major offensive, which Ukrainian President Volodymyr Zelensky has announced will take place around the southern Ukrainian city of Kherson. The best policy for the West, therefore, is to double down on supplying Ukraine and allow it to hand Russia a defeat.

Over the last six months, the Western debate—over whether to negotiate for peace or dig in for a longer war—has become increasingly heated. Advocates of a settlement regard continued support for Ukraine as wishful thinking or worse, whereas those in the second camp regard the first as defeatist and appeasing a dangerous power. Obviously, both interpretations cannot be simultaneously correct—even if we account for uncertainty amid the fog of war. Which take is correct will, in turn, determine the best policy response. So what is really happening on the ground?

When comparing the lines from April through today, the striking feature is that they have barely moved, with fluctuations measured in the tens of kilometers at most.

Let’s start with the map. There has been such intense focus on Ukraine’s loss of two significant cities in the east—Severodonetsk and Lysychansk—this summer that it’s been easy to lose sight of the broader picture. Small Russian territorial gains aside, the overwhelming reality is a general stasis in the battle lines. Indeed, when comparing the lines from April through today, the striking feature is that they have barely moved, with fluctuations measured in the tens of kilometers at most. This is nothing close to the dramatic shifts one would expect to see if the tide was really turning. There is good reason for this inertia: Both sides are exhausted and unable to inflict a knockout blow.

If the next phase of the war is marked by similarly incremental change on the ground, then the question becomes which side is better able to sustain a slowly grinding war of attrition. This, in turn, hinges on three main factors: materiel, manpower, and, above all, morale and the will to fight.

Of the three, the balance of weapons and ammunition is perhaps the easiest to measure. According to Oryx, a military analysis website that has painstakingly tracked visual confirmation of destroyed equipment, Russia has lost significantly more heavy equipment than Ukraine—including almost four times as many tanks and five times as many armored fighting vehicles. Even adjusting for Russia’s surprisingly poor ability to control the information environment, a significant disparity likely remains. What’s more, Ukraine still enjoys vast Western military support and can therefore make good on its own material losses. Russia, by contrast, lacks robust foreign backing. China notably has demurred from providing Russia with weapons or other supplies, leaving Russia with only second-tier supporters like Iran. Ukrainian artillery hits of Russian depots and supply lines are also inflicting a toll on Russian artillery capabilities, one of the cornerstones of Russian combat power. Although Russia can burn through mothballed Soviet-era equipment, this stockpile is also finite.

The manpower balance is somewhat murkier since both sides have been cagey about their true losses. We do know that the human toll from the conflict has been staggering. While Ukrainian casualties are believed to be somewhat higher than Russia’s, both sides are estimated to be losing hundreds of soldiers a day.

Although Russia could theoretically draw on a population more than double that of Ukraine’s, Moscow may not be able tap its larger pool of manpower. Ukraine views this war as existential; at the outset of hostilities, the government barred most men between the ages of 18 and 60 from leaving the country in preparation for a military draft. According to Ukrainian Defense Minister Oleksii Reznikov, Ukraine is mobilizing a fighting force of 1 million people, including about 700,000 people in the armed forces and another 300,000 people in other parts of the security apparatus, such as the police and border guard. Even if not all of these personnel will be directly committed to the front lines and will likely be unevenly trained, it still represents a substantial commitment.

Russia, by contrast, has not taken any similar steps. The Kremlin sold the conflict to the Russian public as a “special military operation,” not a full-scale war. Reversing course and sending conscripts to fight in this war of choice would considerably raise the risk of domestic discontent. Although Russia has tried to replenish its ranks through what analysts have called a covert or shadow mobilization—for example, by relaxing age limits and offering financial incentives to woo recruits—there is only so much these weaker efforts can do. The Russian military reportedly still has tens of thousands of vacancies. Consequently, with the Kremlin still avoiding a national mobilization, the balance of manpower favors Ukraine.

Ukrainian polls consistently show overwhelming support for fighting on and staunch opposition to giving up Ukrainian land in return for peace.

Finally, there is the amorphous but all-important question of national morale and the will to fight. So far, neither side shows any sign of cracking. Ukrainian polls consistently show overwhelming support for fighting on and staunch opposition to giving up Ukrainian land in return for peace. And Ukrainians—unlike Russians—will lose their country if they lose this war. Measuring national will in authoritarian Russia is more difficult. Some recent polling suggests that most Russians support the war, but polling in authoritarian countries always needs to be taken with a grain of salt. Although there were some protests at the start of the war and there is anecdotal evidence of war weariness, there has not been any mass unrest or obvious discontent. Still, as time goes on and the impact of sanctions becomes more acute, the question becomes whether the pressure increases enough to shift Russian President Vladimir Putin’s calculus. According to former German Chancellor and Putin ally Gerhard Schröder, the Russian leader is looking for a way out—but this could also be calculated messaging by the Kremlin. Suggesting that Putin is willing to come to the negotiating table will strengthen those in Germany and elsewhere in the West arguing for an accommodation with Russia and an end to military support for Ukraine.

While the outcome of the war is by no means clear, the balance of materiel, manpower, and willpower all seem to make the case for cautious optimism. Setbacks in the Donbas aside, the strategic balance still favors Ukraine. Although Ukraine is unlikely to throw Russia back to its borders any time soon, the war will likely trend in Ukraine’s favor in the coming months. But only if the West does not blink first.